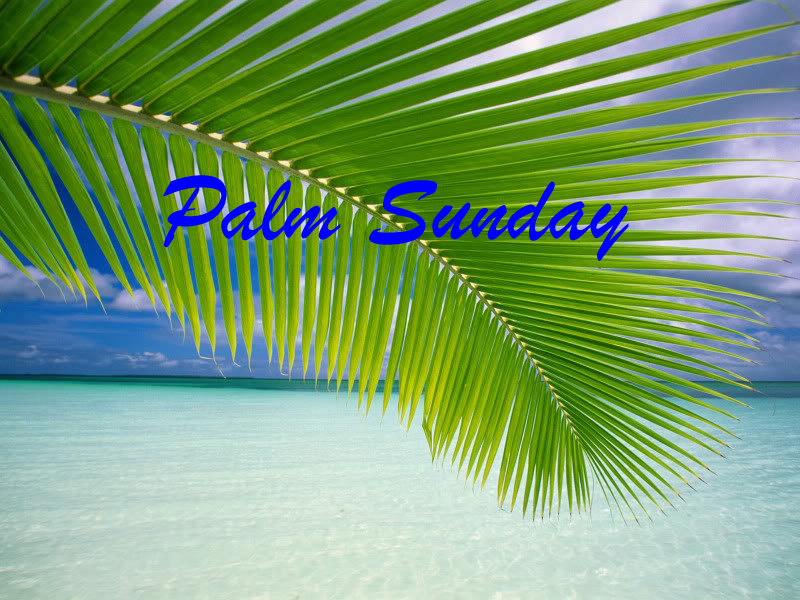 It is a very special Celebration Sunday as today is Palm Sunday. This is the day where Jesus entered Jerusalem riding on a donkey. The crowd loved Him that day as they were hoping Jesus would be their earthly king who would deliver them from Roman rule. They actually said

“Hosanna to the Son of David!
‘Blessed is He who comes in the name of the LORD!’
Hosanna in the highest” Matthew 21:9 (NKJV)!

The word Hosanna in the Greek means, oh save. This triumphant entry occurred on the Sunday before Jesus was crucified. He was crucified on Passover at the exact time the Passover lamb was slain. He arose on Sunday, which was the Feast of First Fruits. Fifty days later, the Holy Spirit was given at Pentecost or the Feast of Weeks. The Festival of Passover occurs in the Spring and lasts for one week, beginning with Passover, where the Seder meal is eaten. The next day began the Feast of Unleavened Bread. The Feast of First Fruits was always the day after the Sabbath, which would be a Sunday. Jesus Christ fulfilled the Spring Feasts on the actual day of the Feasts.

The Fall Feasts are Feast of Trumpets, Day of Atonement and Feast of Booths or Tabernacles. These feasts are yet to be fulfilled. Many believe that they will be fulfilled on the very day because the Spring Feasts were fulfilled on the exact day. What will happen to fulfill these feasts? “The Feast of Trumpets represents the regathering of Israel in preparation for the final day of atonement (Jer. 32:37-41). This regathering began when Israel became a nation again in 1948. The Day of Atonement will be fulfilled when Israel repents and looks to their Messiah (Zechariah 3:9-10; 12:10; 13:1; 14:9). The Feast of Booths will occur when families of the earth come to Jerusalem to celebrate this feast during the Millennial Reign (Zech. 14:16-19)” *.

Please be reminded of what Jesus did for you as we begin this Easter (Passover) week. If you would like to learn more about the Jewish Feasts then read Leviticus 23.

Reminder: the First Blood Moon will occur tomorrow night around 3:00 A.M. This will be the first of four blood moons occurring over the next two years. All four will take place during Jewish Feasts. To learn more about the Blood Moons, then see my posts: 4 Blood Moons and Passover, April 15, 2014 and 4 Blood Moons – John Hagee.