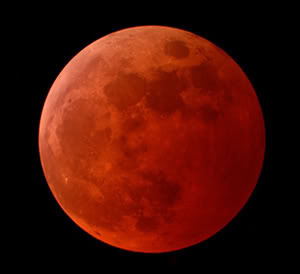 The beginning of the 4 Blood Moon cycles, called a tetrad, begins this Monday night. The first of 4 Blood Moons will occur early in the morning of April 15th, which is the second day of Passover. Passover will be celebrated April 14-April 22 this year so the Blood Moon occurs on the second day of Passover. The eclipse will begin at 2 A.M Eastern time, but the moon will actually turn a copper color at 3:00 A.M Eastern and remain red for about an hour. I plan to set my alarm to see it. I will try to take pictures, but I have not had good luck with night photography. If I get a good picture, then I will put it on the blog. You might also like to take a look at my review of John Hagee’s book, Four Blood Moons. There has been a lot of focus on the Blood Moons on the internet. Some are wondering what they mean, while others are making fun of yet, another, “End of the World” hoax.

As we think about the Blood Moon this Monday, let’s remind ourselves about the Jewish Feast of Passover. The Jewish day begins at sundown so Passover will begin on Monday evening on April 14th. A Jewish family will enjoy their first Seder meal on this evening. I have had an opportunity to attend a Messianic Jewish Seder at a local synagogue. The Rabbi who led the meal is actually a Christian pastor, who is a converted Jew. As we ate the meal, he taught us about the traditions of Seder and related these traditions to the Lord’s Supper. It was a fascinating experience. If you would like to learn more about a Jewish Seder, then take a look at this website: Passover Meal 2014.

You can also learn more about a Jewish Seder just from reading about the Last Supper. I will not go into all the details, but I want to point out one detail during Jesus’ last meal that you might have missed. In Matthew, it says that Jesus and the disciples sang a hymn. “After singing a hymn, they went out to the Mount of Olives” Matthew 26:30 (NASB). There are actually 6 hymns or Psalms sung during a Seder meal. These hymns are Psalms 113-118, which are called the Hallel hymns. The first two are sung at the beginning of the meal and the others are sung at the end. Take a look at Psalm 118: 22, which is one of the hymns Jesus would have sung at the end of the Last Supper.

“The stone which the builders rejected Has become the chief corner stone” Psalm 118:22 (NASB).

The Jews sing this hymn every year during Passover, but never realize who the chief corner stone is. Jesus mentions this verse in Matthew 21:42:

“Jesus said to them, “Did you never read in the Scriptures, ‘THE STONE WHICH THE BUILDERS REJECTED, THIS BECAME THE CHIEF CORNER stone; THIS CAME ABOUT FROM THE LORD, AND IT IS MARVELOUS IN OUR EYES‘” Matthew 21:42 (NASB)?

I encourage you to read the Hallel hymns this weekend or on Monday, the beginning of Passover. As we see the signs in the skies from the Lord, let’s focus on Jesus and what He did for us during Passover. He wasn’t resurrected on Easter Sunday as we celebrate next Sunday, but actually died on Passover and was resurrected on the Feast of First Fruits. On the day that Jesus died, the sun was darkened so they saw signs in the sky as we will see signs in the sky. This Monday night will be the anniversary of Christ’s death, which will also be the beginning of the tetrad cycles in the skies. What is God telling us? I do not know, but He has my full attention over the next two years.

We will see 4 blood moons occur during the Jewish feasts over the next two years, so I hope you will spend some time this year learning about the Jewish Feasts. I recommend reading a book called, God’s Appointed Times, by Barney Kasdan. There is also plenty of free information on the internet.