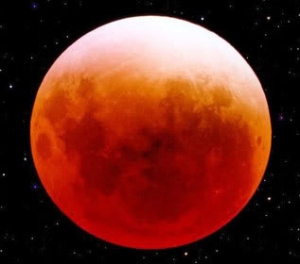 Supermoon/Blood Moon
The moon is called a supermoon, when it is in closest orbit to the earth. Not only will the moon appear larger than normal, but it will also turn red or orange depending on atmospheric conditions. September 27 also marks the beginning of the Jewish Feast called Sukkot or Feast of Tabernacles. This is the 4th blood moon, called a tetrad, to occur on a Jewish Feast Day over the past two years.

If you have ever studied the Jewish Feasts and history, you will know that God does things on His feast days. Did you know that both temples were destroyed on the same day of the year? The first temple, known as Solomon’s Temple, was destroyed in 586 B.C. on the 9th of Av. Herod’s temple, the second temple, was destroyed in 70 A.D. on the 9th of Av. This day of the year is called Tisha B’Av or the National Day of Mourning for the Jews. Jesus also fulfilled the Jewish Feasts when he died on Passover and rose from the grave on Feast of First Fruits.

Before the great day of the Lord, God will use signs in the sky to warn people the end is near. One of these signs will be a blood moon.

“And there will be signs in the sun, in the moon, and in the stars; and on the earth distress of nations, with perplexity, the sea and the waves roaring; men’s hearts failing them from fear and the expectation of those things which are coming on the earth, for the powers of heaven will be shaken. Then they will see the Son of Man coming in a cloud with power and great glory.  Now when these things begin to happen, look up and lift up your heads, because your redemption draws near” (Luke 21:25-28 NKJV).

“I will show wonders in heaven above And signs in the earth beneath: Blood and fire and vapor of smoke. The sun shall be turned into darkness, And the moon into blood, Before the coming of the great and awesome day of the LORD.  And it shall come to pass That whoever calls on the name of the LORD Shall be saved” (Acts 2:19-21 NKJV).

Some people are expecting some catastrophic event to occur tomorrow, but don’t be disappointed if the day passes like any normal day. God can give a sign in the sky without the world coming to an end. Instead of expecting doom tomorrow, take a look at the events which are going on around the world. Rather than doom happening tomorrow, I believe God is showing us that the great day of the Lord is approaching. It is time for the bride of Christ to prepare to meet the Lord. Are you ready? What about your friends and family?

33“Take heed, keep on the alert; for you do not know when the appointed time will come. 34“It is like a man away on a journey, who upon leaving his house and putting his slaves in charge, assigning to each one his task, also commanded the doorkeeper to stay on the alert. 35“Therefore, be on the alert—for you do not know when the master of the house is coming, whether in the evening, at midnight, or when the rooster crows, or in the morning— 36in case he should come suddenly and find you asleep. 37“What I say to you I say to all, ‘Be on the alert!’” Mark 13:33 (NASB)