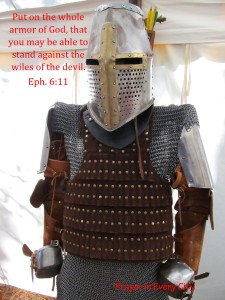 Free Download
Download this pdf file (Spiritual Warfare) for a printable, condensed version of this lesson to place in your Family Photo Prayer Journal. You will want to read both the document and this article, because they are not the same. I have included more information on the printable version, but more explanation here.

Reasons people don’t attempt spiritual warfare.
Spiritual Warfare can be very intimidating to some Christians. This can happen for many reasons, but I believe their are two main problems. First of all, Christians lack understanding about Satan and demons. Secondly, they fail to realize they have the authority to do something about it.

Not a “how to” lesson on casting out demons.
This will be a simple lesson on spiritual warfare, which will help you learn to take authority over demons in your own life. I will not go into detail about how to cast out demons. However, many of the techniques are the same. Casting out demons is more advanced, because discernment must be used as to whether or not this would be beneficial to the individual. If you cast the demons out of an unsaved person, who does not accept Christ, the demons can return with more demons. This person would be worse off than they were before.

“Now when the unclean spirit goes out of a man, it passes through waterless places seeking rest, and does not find it. “Then it says, ‘I will return to my house from which I came’; and when it comes, it finds it unoccupied, swept, and put in order. “Then it goes and takes along with it seven other spirits more wicked than itself, and they go in and live there; and the last state of that man becomes worse than the first. That is the way it will also be with this evil generation” Matt. 12:43-45 (NASB).

Where are Satan and his demons right now?
Let’s deal with the first issue in spiritual warfare. Where are Satan and his demons? Some people believe they don’t exist, while others believe that Satan is the ruler of hell. They believe that Satan and his demons live in hell, ruling over all the lost souls who are there. This is not the case. Although some demons are chained in hell (2 Peter 2:4), others posses people (Matt. 8:28-33). In Matthew 8, the demons did not want Jesus to cast them into hell before their appointed time, so they asked to be cast into swine. Not only do these demons posses people, but they harass Christians. In fact, Satan still has access to heaven where he goes to accuse the brethren (Job 1:6-12; Rev. 12:10). The Bible also tells us that spiritual warfare happens in the heavenly places (Eph. 6:12; Dan. 9:12-13).

Your battle is not with your co-workers, spouse or children, but with demonic forces.
Many people also fail to realize when spiritual warfare is taking place. The Bible, “For our struggle is not against flesh and blood, but against the rulers, against the powers, against the world forces of this darkness, against the spiritual forces of wickedness in the heavenly places.” Eph. 6:12 (NASB). When your boss bites your head off or your marriage is plagued with problems, spiritual warfare is taking place. Your boss and your spouse are not your enemies, but their is an enemy behind these problems. The true enemy in your life is not people, but Satan and his demons. When you realize this crucial fact, you can begin fighting in the spiritual realm so to speak. The spiritual warfare fight takes place in prayer, but we also need to remember that Christ gave us authority over these demons in our lives. We don’t have to pray for God to take care of the demons, because he has given us the ability to do it ourselves in the name of Jesus. Not only can we cast out the demons in our lives, but we can do it in a word (Matt. 8:16) or with little battle.

Your authority.
Before we discuss the specifics of how to do this, let’s take a look at a few verses on the authority granted to us by Jesus:

“These signs will accompany those who have believed: in My name they will cast out demons. . .” Mark 16:17 (NASB).

“He replied, “I saw Satan fall like lightning from heaven. I have given you authority to trample on snakes and scorpions and to overcome all the power of the enemy; nothing will harm you. However, do not rejoice that the spirits submit to you, but rejoice that your names are written in heaven” Luke 10:19 (NASB).

This authority was not only given to the disciples and to the seventy, but to you as well. But if you plan to take authority over Satan and his demons, you better have on the full armor of God. To learn more about this, please see my post: Sit, Walk, Stand, Bow: The Armor of God. Depending on how strong the battle is in your life, you may need to fast as well (Matt. 17:21). For more on warfare take a look at this post: Boot Camp 101: Spiritual Warfare.

When you use your authority against the demonic forces, you should not have to use lengthy dialogue. Jesus and his disciples usually spoke a sentence or two, when casting our demons. If you cannot do this so quickly, then make sure you are filled with the Holy Spirit: 4 Steps to Being Filled With the Holy Spirit and you have fasted sufficiently. Daniel had to fast 21 days, so a one day fast may not be enough.

How to deal with demons.
Here are a few examples of Jesus and his disciples casting out demons:

“But Paul was greatly annoyed, and turned and said to the spirit, ‘I command you in the name of Jesus Christ to come out of her!’ And it came out at that very moment” Acts 16:18 (NASB).

If you wish to print this lesson:
I have created a printable lesson on spiritual warfare for you. You will want to take a look at it, because it has more details with more verses. Spiritual Warfare pdf